From Inaugural HackerYou Bootcamp to Mozilla: How Coding Can Help You Help Others

From Inaugural HackerYou Bootcamp to Mozilla: How Coding Can Help You Help Others 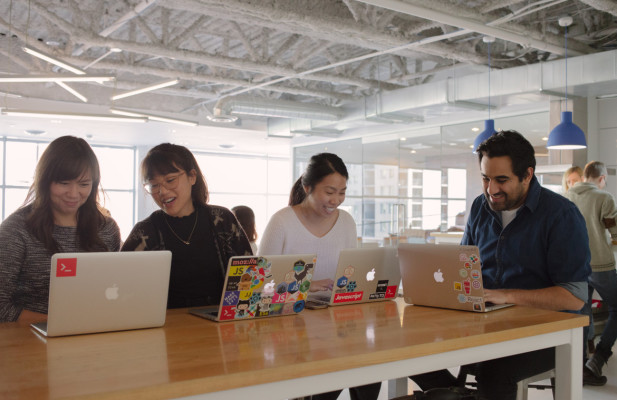 HackerYou has called 483 Queen Street West home since January 2014. As we prepare for an expansion into "HackerTwo" next door at 485 Queen Street West, we asked some alumni about where their paths have taken them after HackerYou. Andrea Del Rio is a graduate from our very first bootcamp and is now an Open Web Fellow at Mozilla. Before starting at HackerYou, Andrea worked as a management consultant in her hometown of Lima, Peru. She was drawn to HackerYou for a number of reasons, but one of the biggest selling points was our deep connection to Ladies Learning Code (for those who don't know, HackerYou was started by the same team that started Ladies Learning Code). "This meant they had a good notion of the importance of promoting diversity in the software development industry." One of Andrea's biggest goals when enrolling in the bootcamp was gaining knowledge that she could share with others. After completing the bootcamp, Andrea moved back to Lima and founded a startup. She then moved into a role at Laboratoria, a social enterprise that turns underprivileged young Peruvian women into front-end developers and then helps them land jobs at digital agencies. There, she had a dual role as an instructor and a User Interface Developer. "Being a teacher enabled me to act on my commitment to help other women enter the tech industry. Many of my students are now employed as developers and are happy doing a job they love and with a higher wage." At the end of 2014, via Twitter, Andrea learned about the Ford-Mozilla Open Web Fellowship. The fellowship is an international initiative that brings together the best emerging talent in tech to protect the Open Web. After months of interviews, Andrea landed the position and is now working remotely in Lima, working from the office for the Association for Progressive Communications. This fellowship plays perfectly into Andrea's goal of sharing her knowledge. "If you are a developer with an interest in protecting the Web and making sure it remains awesome, safe and fair for everyone, I encourage you to apply to this fellowship. You get to bring all your skills to your host organization and you learn a lot." To learn more about Andrea's story and her experiences at Mozilla, take a look at her blog.

Curious about our bootcamp? Our Fall 2015 session begins September 14 and we are currently accepting applicants for our Winter 2016 session. Learn more here.