The HackerYou Campus: 12,000 Square Feet in the Heart of Toronto

The HackerYou Campus: 12,000 Square Feet in the Heart of Toronto 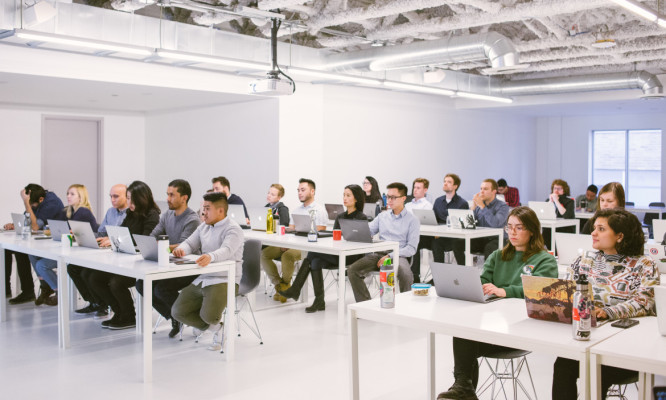 When we founded HackerYou in June of 2012, we had no idea what it would become. Back then, we had one goal: to offer the best part-time HTML & CSS and responsive design courses anywhere. Courses that were hands-on and project-based. Courses led by the best in the industry, with a small ratio of students to instructors, in learning environments that inspire. We leased an 1100 square foot office at the Centre for Social Innovation, signed up Lead Instructor Wes Bos and a team of incredible teaching assistants, found 30 willing guinea pigs, and off we went. And the course was great. So great that we offered another one. And another one. Soon, our graduates were asking for intermediate courses, and even full-time learning opportunities. In January of 2014, we made two huge moves: we launched our full-time front-end bootcamp, and moved into a brand-new 7000 square foot space at Queen & Spadina, which we affectionately refer to as "The Lab". 2014 turned out even better than we had hoped or imagined. 100 people graduated from our front-end bootcamp - 63 of them women. Our placement rate is close to 100%; to date, we're still working with just four of our graduates to help them achieve their professional goals post-bootcamp. In 2014, we launched two brand new part-time courses (JavaScript & jQuery and design fundamentals), and students loved them. And, of course, we kept doing what we've been doing since the beginning - offering the best part-time HTML & CSS and responsive design courses anywhere. They're so popular now that we ran two sold-out sessions starting in January 2015 instead of one! The crazy part? We still don't advertise. Most of our students still find us through word of mouth. There's one more amazing thing that happened in 2014 that I really didn't expect. I didn't plan for it. It didn't really even come to mind. But it's probably the coolest thing about HackerYou right now. When people finish a course at HackerYou, they often don't leave. Our bootcamp graduates especially are incredibly engaged. They come by after work or on their lunch hour. They come to Show and Tell on Fridays, and to Demo Days at the end of each cohort. They'll volunteer to do code reviews with current students, or to go through the basics of JavaScript over again. They collaborate on projects, run sessions for one other, and bring ideas to me and the rest of the HackerYou team for how we can improve. Seeing HackerYou's alumni community develop, and seeing how supportive our graduates are of each other has truly been one of the best parts of starting HackerYou. On a personal note, I'm amazed by how many of our graduates I can genuinely call my friends. These are some of the best people in the world. A few weeks ago, I was looking around The Lab at 6 pm on a Thursday. Bootcamp students were pouring out of the big classroom to make room for that evening's part-time class. 60 part-time students were arriving, mingling before heading into their respective classrooms for that evening's lesson. A few alumni were hanging out, and staff were spread out around the space greeting part-time students as they arrived or chatting with groups of alumni or part-time students. The energy in the room was incredible. But it hit me like a ton of bricks. We needed more space. I emailed our landlord that evening to inquire about converting the apartments on the floor above us into commercial space. She replied that it would be tricky, but that they had coincidentally just purchased the building next door to The Lab and that there were 5800 square feet for lease there on the second and third floors. Life is funny sometimes, isn't it? Three weeks later, the deal was done. On May 1st, we'll begin construction on Phase 2 of The Lab. The address is 485 Queen Street West, the building right next door to our current space. We'll be working once again with the talented Vicki Bouros who we know will turn the space into exactly what we need. Once again, we'll be documenting the journey on our Tumblr about The Lab. We've already posted our space plan for you to take a look at. We're excited about what the new space means for us, both in terms of being able to support students as well as alumni. But we're also excited to be doubling down on Toronto. I've never been very interested in geographic expansion, but the chance to take on more space right at Queen & Spadina makes so much sense. 12,000 square feet is exactly what we need to continue serving students and changing lives. Follow along as we renovate Phase 2 of The Lab via our Tumblr. Interested in taking a course at HackerYou? Learn more at hackeryou.com.