The five reasons we're most excited about HackerYou Summer Academy 2013

The five reasons we're most excited about HackerYou Summer Academy 2013 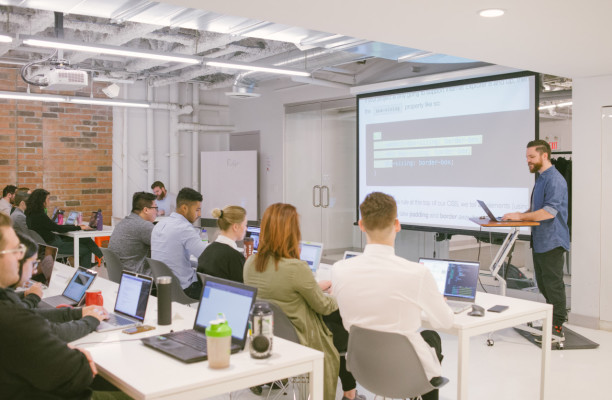 We are thrilled to announce that, this summer, you can apply to join our first HackerYou Summer Academy, which we're hosting in Ottawa in partnership with Shopify. Come and learn Ruby on Rails, build applications and collaborate with some of the smartest up-and-comers around. You’ll learn directly from some of Shopify’s most talented software engineers, be mentored by Shopify employees, and participate in Shopify’s day-to-day activities so that you can see exactly what it takes to build an industry-leading startup from the ground up. To learn more about the program, click here. (Also, thanks to Shopify, we have a number of scholarships and travel bursaries available for talented applicants to the Summer Academy program. Sign up to learn more: http://eepurl.com/xg4J1)

And now, here are the five reasons we're most excited about HackerYou Summer Academy 2013:

1. We're just getting started and so far, the applicants are awesome. HackerYou always attracts awesome people. From designers to marketers to doctors to teachers to consultants to scientists to students to entrepreneurs to community managers, we've had them all. And more! Diversity is one of the things that makes HackerYou different, and great. We're proud to be the most diverse programming bootcamp in the world. It's already clear that Summer Academy is going to be no different. Of the applications we've received so far, 75% are from outside Canada. And more than 50% consider themselves to be part of a group that is typically underrepresented in the technology industry. (Yes, we track that.) We're also collecting information from people who would like to be informed when we open up applications for scholarships and travel bursaries. That group is even more diverse. I just can't wait to start interviewing everyone. It's one of the best parts of my job at HackerYou. (If you'd like to sign up to be informed when scholarship and bursary applications open, please click here: http://eepurl.com/xg4J1)

2. Ruby on Rails is awesome.

Summer Academy will be HackerYou's third time offering a Ruby on Rails course. We have a three-month, part-time Ruby on Rails course happening right now in Toronto. Led by Ryan Brunner and Brad Robertson from Influitive, I can say for a matter of fact that the course is amazing. I know because I've been participating as a student. Partially because familiarity with our Ruby on Rails course content is going to make future HackerYou courses (like Summer Academy) better, and partially because, well, the whole reason I started Ladies Learning Code and HackerYou was because I wanted to learn to code. Learning Ruby on Rails at HackerYou has been an incredible experience. I feel like I finally understand from both a theoretical and hands-on perspective how people create the software we all use every day. And even though I have miles to go, knowing how to create an application that will turn any idea I may have into reality is within reach. In fact, the rest of the participants and I are already doing it. For example, as our final class project, fellow participant, Dan Kalmar and are building an app for booking meeting rooms in offices. Outside of class, participants Meredith Underell and Emily Gutierrez and I (under the expert guidance of HackerYou mentor Rebecca Putinski) are now rebuilding the Ladies Learning Code job board. Having the skills to build software to solve problems in your own life and beyond is incredibly rewarding and I can't wait to have another awesome group of people realize and embrace this at HackerYou Summer Academy this year.

We are pumped to have Shopify on board as a partner for HackerYou's first Summer Academy. They are awesome. Just take a look at their careers page and try to tell me that, even if you're happily employed, a small part of you doesn't want to work there. They're an incredible company, an amazing Canadian startup success story, and their office is absolutely overflowing with talent. And HackerYou Summer Academy will be hosted right in the middle of it all - in Shopify's community space. Developers, designers, product managers, business anaylsts, members of the Executive Team and many of the rest of Shopify's 141 employees will be in and out of the space every day. You'll feel the energy. Yes, nine weeks of full-time coding will be grueling, but doing it out of Shopify's office, with guidance and support from some of Shopify's best, is going to be pretty darn motivating.

4. We're able to offer scholarships and travel bursaries for the first time.

Thanks to Shopify, we're able to offer a number of scholarships and travel bursaries to successful applicants to Summer Academy. It's one of the coolest things about Summer Academy, and it was entirely Shopify's idea. As a company, they really care. It's ingrained in their culture. They support countless initiatives in Ottawa (including one of my own) and now they're helping to make Summer Academy not only the most diverse programming bootcamp in the world, but also the most accessible. How cool is that?! To be notified when scholarship applications open, please sign up here.

In Toronto, we've had tons of success running our courses in Web Development and Ruby on Rails. People are getting new jobs, landing promotions, negotiating raises, taking on new responsibilities, and doing freelance work full-time or on the side, all because of the skills and confidence that they gained at HackerYou. But we're really excited to offer this type of program for the first time. Mainly because we've seen what HackerYou graduates are able to do in such a unique environment! Nine weeks dedicated to building your skills as a software developer, working on projects and collaborating with people just like you. It's exactly what I'd love to do this summer. Which is why I'll be moving to Ottawa to run - and participate in - the program. And boy, am I excited about it. If you have any questions about the program this summer, please don't hesitate to reach out.

You can email me at heather [at] hackeryou.com, or tweet at me - I'm @heatherpayne.

-- Thanks to Tobi, Daniel, Serena, Edward, Cheryl and Nicole and the HackerYou team for their respective contributions to making HackerYou Summer Academy happen.