The switch to the lightbulb: How teaching helped me love what I do again

The switch to the lightbulb: How teaching helped me love what I do again 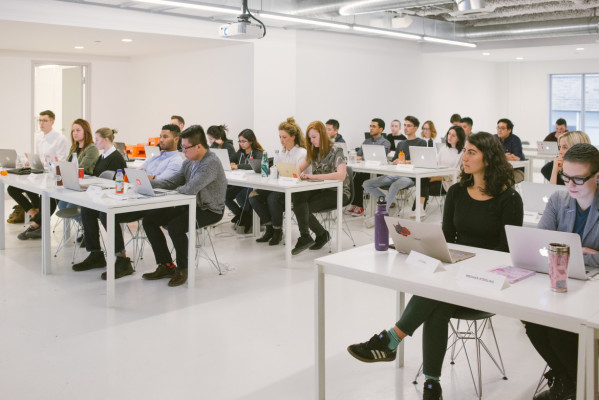 This post is written by Drew Minns, the latest addition to HackerYou's incredible teaching team, and was originally published on Medium on April 28th, 2014.

The world of HTML, CSS, Javascript and PHP have now become Jade, Sass, Angular and Node to me. Sure, I would’ve learnt them anyways as I moved along my career, but something else happened. I became a teacher and it reignited my passion for what I do. Now, I’ve talked about how I graduated from college and immediately followed my passion in the entertainment industry. I then moved into a world of agencies and startups. I’ve had the people try to sell me on their company with foosball tables and beer taps. But really, I’m a sucker for a good passionate team. These are hard to find. Nothing will inspire me more than being surrounded by people who are enamored in a project as much as I am. I was truly feeling uninspired and down on myself and the industry. Enter teaching. I just finished teaching a term at Humber College in Toronto and it was the greatest thing I’ve ever done (I haven’t married my beautiful fiancée just yet). Being that I went to Humber College many moons ago, it was a total ego rub to be asked to teach there, but also it expanded my skills in ways I could’ve never imagined.

I taught the second year students all about pre-compiled CSS languages, SVG, animation, responsive grid systems and PHP (*shudder*). This ruled. I took the approach of not a hard ass teacher, but someone who just wanted to share what I love so much with like-minded people. It worked. The students are requested to review the teachers and I ended up in the top 10 teachers in the entire school. Maybe it was the fact that I showed up with a beard and covered in tattoos and said to them, ‘this is a great industry’. Now I sometimes had to be strict when it came to assignment submission dates, but I believe that because I empathized with them about what it’s like to be a student, I won their trust. I love those students. I learnt complete humility and selflessness by not working for the school and the money, but by working for them. Nothing compares to that feeling you get watching a lightbulb go off in someones head. In terms of growing my skills, I no longer have fear have public speaking. As well, do you know how hard it is to put into tangible words, what you do everyday? Also, good luck explaining floats to someone.

The second time around, I was tasked with teaching the first years. Two classes, 25 students each. Now I don’t do attendance, they’re adults who can make the decision based on their attendance themselves. So every class, I’d notice it getting smaller and smaller. At first, I thought it was because of me. Was I a terrible teacher? Did they hate me? After speaking with other faculty members, that in the first year, people discover that a program isn’t for them. Phew, it wasn’t me. Now the big difference between the first and second years is that by the second year, those without passion have left and what you’re left with is eager students champing at the bit to get out there and work. The first years are engaging in self-discovery and perhaps for the first time, living away from home. I can’t blame them for showing up to class hungover. Ultimately it’s their lives. Now let’s try an exercise. Think of the first time you saw HTML code, did you understand it? Now think of file paths, those of us that work with files understand the ../ syntax to mean _go back, _but now explain that to someone. It’s not the normal way of doing things. Usually to people going to school with brand new Macs and blown away with their ease of use, why is HTML code so archaic and basic. Everyday, that was my life. How to explain something to someone that assumes the world has changed so much, yet code still uses basic syntaxes.

During the last year of teaching, I’ve had a couple jobs. I was at a startup that scaled down so I was left out on my own, I took a contract with a big corporation and finally thought I had found stability in my return to the entertainment industry. Because college takes a summer break, I would too from teaching. So I approached HackerYou and asked how I could volunteer my teaching experience so I could keep indulging that muscle in my brain. They offered me a job. I wasn’t expecting it. See, what HackerYou does is great. They offer a full-time front-end bootcamp for people looking to expand their skills or move in a different direction. HackerYou came from Ladies Learning Code, a collection of workshops designed to remove the gender gap that exists in the tech industry. So I will be going from working full-time with one day off a week teaching, to teaching full-time. I couldn’t be more excited because teaching has sparked my passion again for this industry. The more I learn, and grow my skills, the more I can inspire people to join this industry. Until I no longer get that warm fuzzy feeling from seeing a lightbulb go off in someones head, I will be a teacher. So if you are no longer feeling the passion, go and share your skills with someone else. I guarantee you that you will love what you do once again.