Why I'm Signed Up for HackerYou's Rails Course

Why I'm Signed Up for HackerYou's Rails Course

This post was contributed by Alan Judson - he's one of the 30 students that will be joining us at our Intro to Rails course in January! Learn more about that course here, and learn more about Alan below!

I have a secret. At night, when the kids are in bed and my wife is out at the coffee shop doing some freelance work, I am on the internet learning to code. I love learning new things and, especially, I love becoming very good at them. I don’t always succeed, though. I never did manage to teach myself Latin (or French, or Spanish, or Korean, for that matter). Things I've taught myself (with great success) include several musical instruments and Microsoft Excel. The things I’ve had success with have something in common: instant feedback. Excel provides a dizzying array of error messages, and musical instruments, well, I’m sure you’ve heard a beginner guitar player (or, worst-case scenario, violinist). Without feedback, self-study is a struggle.

Self-studying in the programming world is easier than ever: there’s Codeschool, Codecademy, Rubymonk, and TryRuby, just to name a few. To get feedback on why something isn't working, though, you often have to search through the haystack of Google and Stackoverflow. It’s awesome that they exist, and I’ve gotten pretty far that way. But, you know what’s better than that? Putting up your hand and having a passionate teacher explain it. A good teacher can smooth out the learning curve and even help you dodge the hours of set up required before you can even start coding.

I heard about HackerYou through a blog that listed programming crash courses, and was excited to see that there was one offered in Toronto! It was too late to register for HackerYou’s first three-month course, so I sulked a bit, but then discovered a three-hour “Intro to Ruby on Rails” workshop that they were running (just like this one). I’ll tell you why it suited me perfectly.

Everyone at HackerYou wants you to succeed. The instructors are full-time, working-in-the-business professionals that use this stuff every day. With a student-to-instructor ratio of 10:1, the workshop was super helpful. The instructors answered three months’ worth of my internet forum questions in three hours (and minus the snark). Just think how excited I was when HackerYou announced a three-month Ruby on Rails course. Hint: I was elated.

I’ll end with a comparative study on my experiences with applying to university vs. HackerYou. I thought university was going to be Dead Poets Society. It wasn’t. It was closer to the Pink Floyd “The Wall” end of the spectrum (but not as catchy).

If you’re stuck in a study loop and have a day job, apply to join this upcoming course. I’ll see you at the Dead Poets Society. Robin Williams not included. 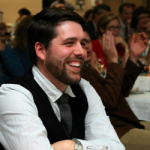 Alan Judson, of Hamilton, ON, has a life of a thousand simple pleasures. A daytime data analyst, he fills his summer nights as a bluegrass musician playing in small pubs and every pig roast in the area (bluegrass and bacon, anyone?). He has an insatiable urge to learn, and a special obsession for looking up words in the dictionary. As a habitual autodidact (looked up this word today), he can't wait to throw himself (further) into web programming. He’s in his glory, though, goofing around with his devastatingly gorgeous kids and spending time with his best friend, his high school sweetheart – awwwwww!